Despite Oslo's northern latitude, the same as Anchorage, Alaska, swimming in the Oslo Fjord is a popular summer time activity. Until recently, there was no public swimming in downtown Oslo - one had to take a ferry to one of the nearby islands or a bus to a seaside suburb.

Now that commercial shipping and heavy traffic have been removed from Oslo's central harbor, public beaches are now to be found downtown and are packed with locals on warm days.

The first area to open up to public bathing was Tjuvholmen, an old shipyard that has been converted to residential and recreational use. 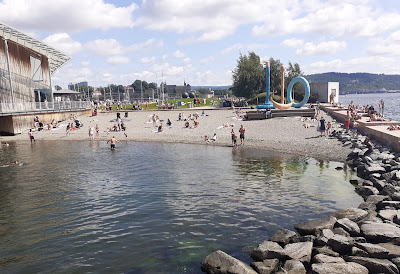 After that came Sørenga. A wharf area since the middle ages, it has been transformed in the past 10 years to a popular residential area with a beach and a purpose built  floating quay for swimming. 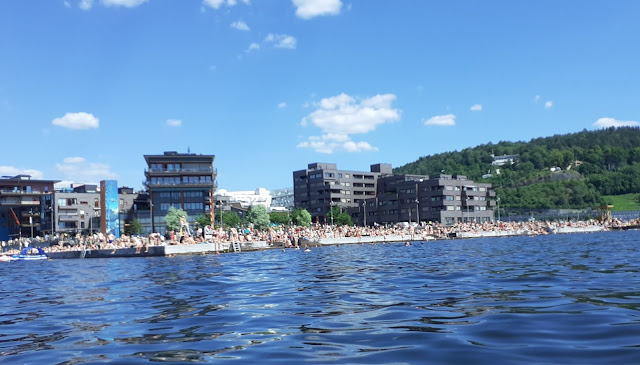 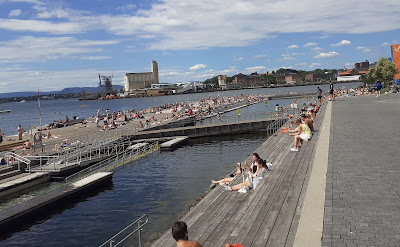 The most recent addition to Oslo's downtown beach scene is the beach by the Opera House, which opened in July, 2021. It features a beach for kids and one for adults. 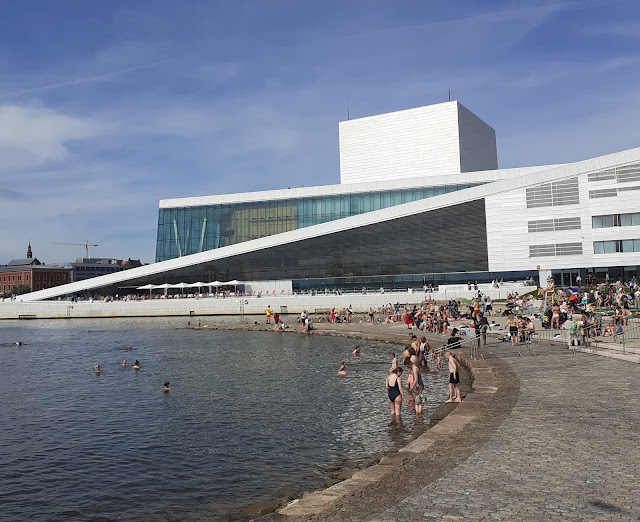 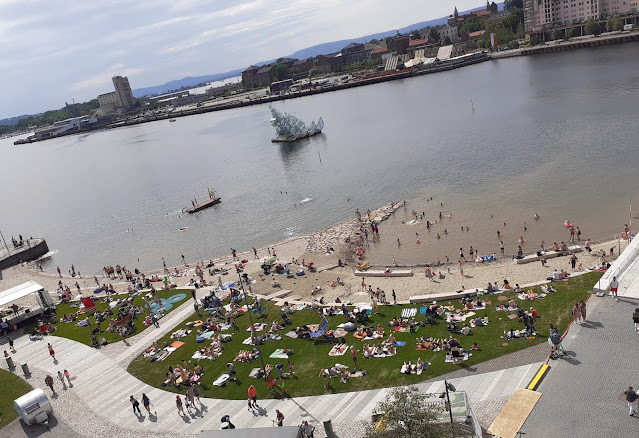 In addition to beaches and docks for swimming, Oslo has seen a flotilla of sauna boats pop up along the central harbor in recent years. After working up a sweat in the sauna, one jumps into the fjord to cool off. 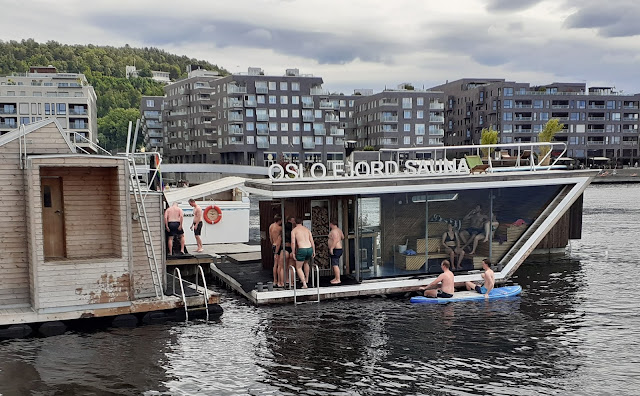 Posted by Amexpat at 8:19 PM No comments:

The Vigeland Museum is a hidden gem in Oslo.You can usually have the place almost to yourself, even during the height of the tourist season.  Gustav Vigeland is Norway's greatest sculptor and his sculpture park, the largest in the world done by a single sculptor, receives a large proportion of visitors to Oslo. Most that do visit are awed by the sheer scale of the sculptures and the park. But in many ways you can better appreciate Vigeland's monumental sculptures by getting an up close look at the plaster models in the nearby museum that was his workshop. The museum also has some of Vigeland's sculptures that predate the work that you'll see in his park and are stylistically quite different. 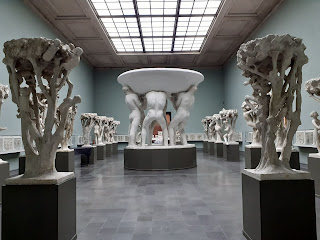 Above are the models for the Fountain and the surrounding Trees of Life. 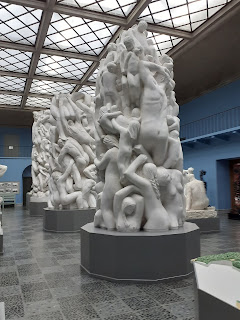 The Monolith was too large to fit in his workshop. So Vigeland made the above sculpture in three pieces. It took 3 men 14 years to chisel this model in the park. 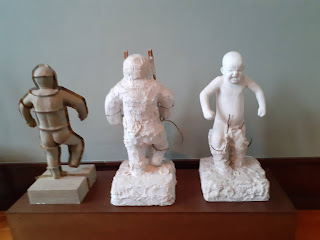 You can see how the most famous sculpture in the park, the Sinnataggen (The Angry Boy), was made.
Posted by Amexpat at 10:49 AM No comments:

Karl Johansgate is Oslo's main street. It connects the Norwegian Parliament to the Royal Palace. About halfway between is a statue of a modest looking man standing next to his bicycle. That's Gunnar Sønsteby, Norway's most decorated WWII resistance hero. 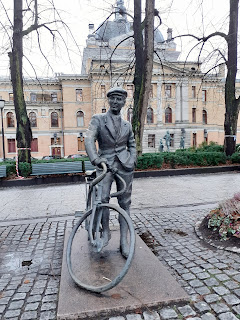 Shortly after the Germans invaded Norway on April 9, 1940, they marched down Karl Johansgate. Gunnar was there, with his bicycle, to witness the event. He later became the head of the resistance in Oslo and the most sought after man by the Gestapo in Norway.  Gunnar passed away in 2012, but the statue of him with his bike can be seen on Karl Johansgate very close to the actual  spot where he witnessed the Germans taking over Oslo, as shown in the photo below. 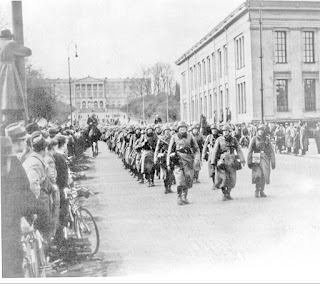 Anyone who knows anything about the Vikings knows that they did not have horns on their helmets. That misconception came from a Wagner opera.

In fact, only one complete Viking helmet has been found - the 10th Century Gjermundbu Helmet which was discovered on a Norwegian farm in 1943. You can now see the helmet at the Historical Museum in Oslo this summer. 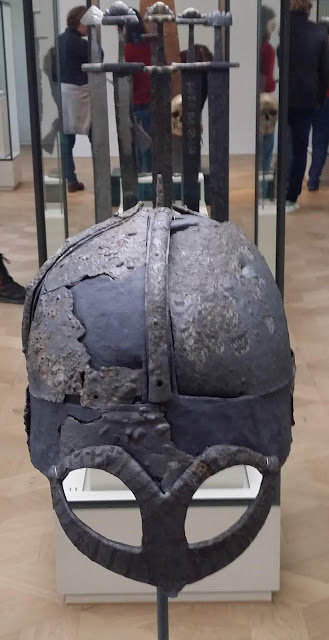 Reading Norwegian literature before or during your trip can enhance your journey. Below are a few authors that I've labelled "classic" even though they are not that old. They are mainstays in Norwegian literature.  Further down are Contemporary writers

HENRIK IBSEN is Norway’s most well known writer and today is the second most performed playwright in the world after Shakespeare.  Many of Ibsen’s plays dealt with societal issues that were taboo subjects at the time. Foremost among these is A Doll’s House (1867), which criticized the role of women in society. Ghosts (1881) and An Enemy of the People (1882) dealt with the moral hypocrisy of his times.


Peer Gynt (1867) is probably the most celebrated play with Norwegians today. There’s an annual week long Peer Gynt Festival in the Gudbrandsdal Valley where the play is performed outdoors, not far from where the real life model for Peer lived.

KNUT HAMSUN is one of the great European novelists – Issac Bashevis Singer said that "the whole school of fiction in the 20th century stems from Hamsun". Hunger (1890) was his breakthrough book and is considered to be one of the first modernistic novels. This semi-autobiographical work about a starving writer pioneered the stream of consciousness technique. Pan (1894) and Mysteries (1892) are two of his stronger novels from his early period. Hamsun later wrote more conventional novels that gained a widespread ridership. The epic Growth of the Soil (1917) earned him the Nobel Prize in Literature in 1920.

Unfortunately for Hamsun’s reputation he lived too long and as an old man he supported the German occupation of Norway during World War II. This was very hard for the people in Norway to understand and accept as he was the nation’s greatest writer. Two good biographies, Enigma: The Life of Knut Hamsun (1988) and Knut Hamsun: Dreamer and Dissenter (2009), attempt to explain how such an insightful writer could have supported the Nazi occupation.

SIGRID UNDSET won the Nobel Prize in Literature in 1928 for the Kristin Lavransdatter trilogy, a historical novel taking place in medieval Norway. The book is noted for its historical accuracy and for telling this epic tale from a woman's perspective. The newer Penquin translation is easier to read than the original translation. At over 1000 pages, it will make for a fine companion during your trip to Norway.


NORWEGIAN FOLKTALES  were collected by Asbjørnsen & Moe in the mid 1800’s. Like the German brothers Grimm, they traveled around the rural countryside collecting folktales. Their published versions of these folktales have had a huge impact on Norwegian culture and their Troll stories  are read around the world, most notably, the Three Billy Goats Gruff. There have been many versions translated into English, this one includes some original illustrations by Thoedor Kittelsen who created the vision of Trolls we have today.

The popularity of Nordic Noir has given Scandinavian crime writers an international readership. The Swede Steig Larsson was the first to have worldwide fame. Norwegian Jo Nesbø is now the most prominent writer in the genre. He’s best known for his Harry Hole series, 11 of which have been translated into English. The series started with The Bat  and The Snowman was recently made into a film. Nesbø has also written some stand alone books: The Son and Headhunters are two good examples.

Anne Holte is another popular Nordic Noir writer in Norway. Her Hanne Wilhelmsen series, started by Blind Goddess , took Norway by storm and led to her being named Minister of Justice a few years later. Karen Fossum and Gunnar Staalesen are two other Nordic Noir Writers who are widely read in Norway.

More Highbrow readers might like Karl Ove Knausgaard and Jon Fosse. Knausegaard is best known for his six volume autobiographical My Struggle. This  series has gotten rave reviews internationally for its brutally candid details of his family and friends.

Jon Fosse is currently one of the most performed living playwrights in the world. In appreciation for his contribution to Norwegian culture, the government has given him an honorary residence next to the Royal Palace for the rest of his life.

Other contemporary Norwegian writers who have been translated include: Linn Ullmann, daughter of Liv Ullmann and Ingmar Bergman, novelist Jan Kjærstad and journalist Åsne Seierstad .
Posted by Amexpat at 12:04 PM No comments:

There are plenty of guidebooks for travel to Norway and Scandinavia. Here’s an overview of some of the better ones that will be useful to either give you ideas before your trip or to assist you during your journey.

Lonely planet  and Rough Guides are the two big names. Both are fairly comprehensive and are worth browsing through before your trip to give you ideas of where you might like to visit. Rough Guides tend to be stronger on culture while Lonely Planet has better maps and practical information. I would give the edge to traveling with Lonely Planet unless it’s an older edition.

Moon travel guides are not as popular or as glossy as the above two, but they have excellent straight forward information and are fairly comprehensive.  They make some unorthodox sightseeing recommendations, which is refreshing as most travel guidebooks tend cover the same sights.

Rick Steves guide books have a more focused approach than the others. Rick limits his coverage to those places he feels are central and he likes. He has a wide following of independent travelers in the mid price range. His walking tours are very well done. The maps and practical information are not as strong as Lonely Planet’s but this is a good choice if you are in sync with Rick’s travel philosophy.

Insight Guides have great pictures and inspiring text but are not good on practical information. So I would read these before your trip and not bring them with you.

DK Eyewitness travel guides have the best visual illustrations I’ve seen. They are great for dense urban areas packed with sights or navigating through a large museum. As much as I like them, I think they are better suited for a visit to London or Paris than travelling around Norway

If you can’t decide between two guidebooks, buy the one that is the most recent. Also be aware that there’s often a year between when books are researched and when they are published, so some information can be outdated.

You’re usually best off buying a Scandinavia guidebook if you’re combining your trip to Norway with a visit to Denmark and or Sweden. The Norway section in those books will be close to what you’ll find in a Norway only guidebook.
Posted by Amexpat at 8:30 PM No comments:

The Little Mermaid and Fearless Girl in Oslo

Oslo has two well known sculpture parks, the Vigeland Park and the Ekeberg Park . Less known are two famous statues that can be found in Oslo: The Little Mermaid and the Fearless Girl.

The Fearless Girl gained international attention in 2017 when it was placed in juxtaposition to Wall Street's Charging Bull in NYC. Initially, it was only to be displayed for one week as part of an advertising campaign for an investment company, but for many it quickly became a symbol of the resiliency of women. The removal of that statute became a political issue and the current mayor of NYC wants it to stay.

A replica of the Fearless Girl can now be seen in front of the Grand Hotel in downtown Oslo. She stands there mostly unnoticed. 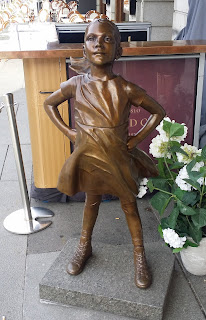 The Little Mermaid has become the symbol of Copenhagen. But you can see exactly the same sculpture by the Folketeateret in Oslo (both are copies of the original). Granted the Copenhagen setting, placed on a rock in the harbor, is more dramatic, but you can touch the one in Oslo and there aren't hordes of tourists blocking your view. 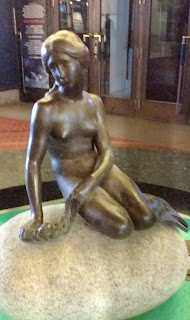 Posted by Amexpat at 8:20 PM No comments: